The Real-Time Experience-based Predictive Simulator (REPS) is a next generation, system that learns in real-time from multiple sources and provides up-to-the minute, situation-based predictions and prescriptive recommendations with explanations. 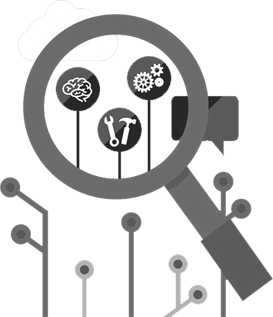 The Semantic Insights Research Assistant (SIRA) is a suite of applications that apply [and grow] domain knowledge to extract meaning from large natural language data sets in real-time.

Natural language understanding (NLU) applies both world and domain knowledge along with natural language syntax and grammar to capture the various interpretations of what is happening within and across a corpus of documents. NLU is concerned with identifying how concepts and things are related to each other in time.

The Next Generation Technology

Computer technology has advanced to the point where real-time simultaneous recording and processing of multiple complex experiences is possible. To meet the needs of our dynamically changing world, statistical averaging of experience is no longer sufficient to adequately predict or prescribe what will happen next. Statistical methods most often fail when each new situation presents facts that are in some way unique. This is the real world. This is the world of natural language understanding. This is the world of 3rd Wave AI.